It's like in the morning when you try to recall a dream from the night before, but all that's left are scraps that dissolve before you can put them together. Emmylou Harris teamed up with an array of talent musicians in 1995 and recorded one of my favorite albums. It is so full of emotion and beauty that it brings me to tears. Daniel Lanois produced the record and his imprint in inescapable. Emmylou and Daniel were made for each other.

Some of the artists involved:

A crowd of tourists are entranced by "Foucault pendulum" at the Griffith Observatory. Listening to the new releases from Prefuse73, Rivington Nao Rio and Travel in Constance Vol. 25. Mixing that with some favorites of his from the past and it becomes radio Guillermo Scott Herren.

The new music fits right into Herren's universe of chopped rhythms and chunky beats. Lots of rich over dubbing and sultry vocals. The total package is noisy and sophisticated.
#music The Aloe Garden at the LA Arboretum is magnificent. There are over 500 variety of Aloe, I do not know how many the arboretum has but it is a significant collection. Many people see the Rosetta shape of the aloe and think of their Tequila and the Blue Agave. According to the folks at the arboretum the Aloe is strictly an old world plant from South Africa, Madagascar, the Saudi peninsula, and the Mediterranean region. Agave's are New World plants from the Americas

Map to Aloes at the Arboretum The Guardian has an article on the severe drought that grips California. As the need to change water restrictions becomes more and more necssesary the habits of urban Gardner's will have to change too. Many gardeners already practice arid gardening and they have produce some beautiful gardens.
#LA 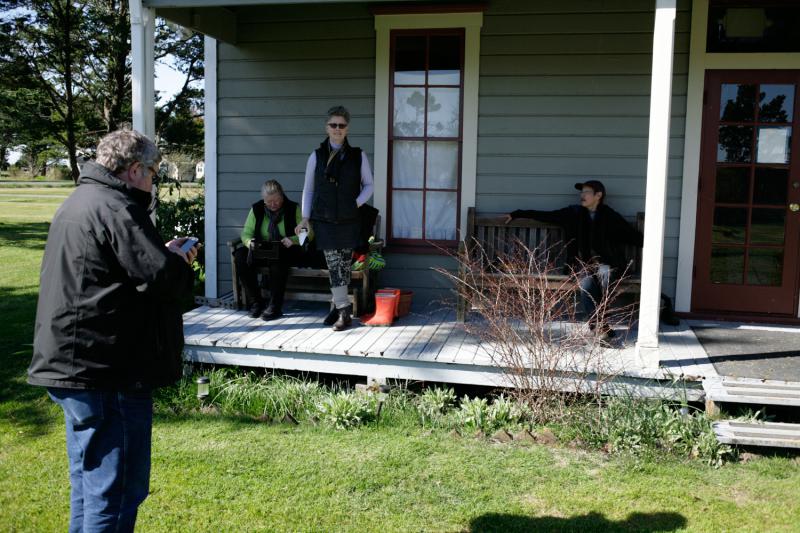 Spending time with friends is the best therapy in our over clocked, over worked world, full of personal stress and global catastrophe. Here four of the six of us who traveled to the edge of the world, hang out for a brief respite on a porch.
#photography A Trip to the WoodShed Hanging out at the Commodore Hotel in Astoria with Florago

I have used twitter for a number of years, I often check in times of Crisis or "Big News", by following enough of the right people you have fast access to breaking news. I follow news organizations, journalists, media critiics a few politicians, NGOs and writers. Then there are the local connections, friends, artists local notables etc.

I might look at Twitter a few times in a week or a few times in a day depending on world events or my free time. My twitter stream is congested but the interface lets you scan quickly and you have the ability to create lists to segregate different types in to groups, this helps cut down on chatter when you are interested in something specific.

I am sharing a tweet above from a local tweeter user, Bertha , "I’m Bertha, the world’s largest-diameter tunneling machine. In summer 2013, I started digging the SR 99 tunnel to replace Seattle’s Alaskan Way Viaduct". You see by the example that even objects or buildings can have a twitter feed. This example is the nugget in this post, today Bertha told the citizens of Seattle two very important things :

WSDOT should put these tweets on a billboard ayt each end of the viaduct. #local